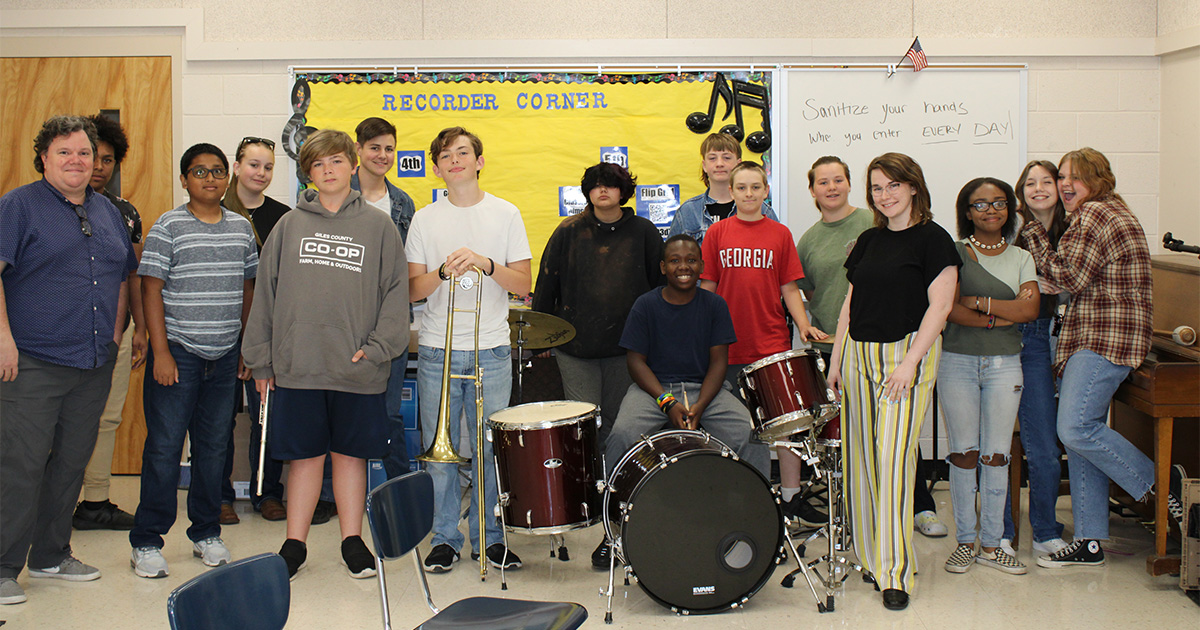 And the Band Played on

Once scientists drew a clear link between the spread of particles when people speak, sing, and play instruments and the transmission of the coronavirus, band programs at all levels of education were put on notice.

As a result, band student retention plummeted, often by double-digits.

One way some band programs adapted – and as a means of combatting the fears of infection from students and parents alike – was the implementation of specially designed masks that would allow them to play without spreading the virus.

Other programs, like the one at tiny Elkton Elementary in even tinier Prospect, Tenn., were decimated. If students returned at all, many of them did so to a program in upheaval. A new Fine Arts Director, Sara Slusher ’20, had been hired, but there were still some fears to overcome and piles of instruments to be repaired.

“This was my first teaching job, and, when I first walked in (to the band room), what I found over there was a trombone that was really gritty,” she said, pointing in the direction of discarded and misfit instruments. “We had a broken trumpet and a flute that was working – kind of. We had a small drum that was broken and a snare drum that worked. We had an old marching bass drum that the back was torn out of, and that’s all I had when I started my first day.”

That and about eight kids who had returned to the program as eighth-graders.

“Luckily, they had instruments from the beginning, but, anybody new who was coming in, we only had a few students who would be able to buy them,” Slusher said.

With quite a bit of work, and even more luck, Slusher cobbled together instruments from other schools, pawn shops, yard sales, and Facebook marketplace so that the 24 students who eventually joined the band could play.

One of those kids was Graham Hoover, a seventh-grader who, from the moment he heard Ms. Slusher play the trombone, knew that was “definitely what I wanted to play. Definitely. I just thought it sounded so low and mighty and loud, and I like loud, very loud.”

Slusher didn’t want to waste any of the momentum or talent she was building, particularly as the fall semester became spring, and the end-of-year concert would be just around the corner.

With the pile of instruments in mind, she reached out to Sam Merciers, a lecturer in the Department of Music at UNA, and more importantly, the instructor for the Instrument Repair class taught each fall.

“It was good but hectic,” Merciers said of adding Slusher’s instruments to his class. “I had to teach (my students) what was going on, and they acted as a labor pool so that we could get the instruments back to her. It was a lot of going back and forth, and there were times I had to step in and give guidance. To me, the program should be doing that. The students should be learning what kinds of repairs are worth making and what kind aren’t because they are going to be doing that once they’re working as a music director or band director. It was a very collegial environment.”

After weeks of work and repairs, a number of the instruments made it back into the band room and are in the capable hands of students learning how to play them. A few instruments – a saxophone and a clarinet or two – were beyond help and are being used for their parts.

For context, woodwinds, such as clarinets, are more delicate and require a different kind of work than brass instruments, Merciers explained.

“At UNA, we’re really teaching a woodwind repair class,” he said. “I cover some simple brass stuff, like the kind Sara would actually encounter, because it’s really working on plumbing. Woodwind instruments, however, are little machines with lots of moving parts.”

Meanwhile, Slusher is finishing up her first year of teaching, and she and her two dozen students agree the end-of-year concert was a success. She said UNA helped her not only get the job but to be prepared for what she would face once she was in the classroom.

“When it comes to teaching, there is only so much you can do,” Slusher said. “I got the job because of networking, and I am finding success partially because of people like Mr. Merciers whom I can reach out to when I need help. When you’re a new teacher, you feel lost for a while. You know you need to do something, but you really don’t know what. And that feeling lasts for weeks.”

These days, there are no more masks at Elkton Elementary. The doors are open, and students are sitting side-by-side in their classrooms. The specter of the Covid-19 pandemic, however, still looms over programs like band as it rebuilds. Slusher knows all too well the disappointment and frustration that comes from unrealized dreams of performing.

“I did my internship fully masked, and I lost my senior performance and didn’t get to do a senior recital,” she said. “It was really sad, and I cried a lot of tears. You finally work for something, and it goes away. When I came here as a teacher, that’s exactly how all of the kids felt, too.”

Eighth-grader Elizabeth Betterton agrees. She wanted to move faster and learn at her own pace, but there were seventh-graders who had to get caught up and others who were just picking up their instruments for the first time. She admitted to feeling frustrated.

“I love being in the band, and I love knowing how to play an instrument,” she said. “It just felt slow. Still, I am glad I did it, and I’m proud to have been in the band.”

“I like playing the saxophone,” he said. “I think it’s a very fun instrument, and it gives me something I can be passionate about. I follow a guy on TikTok who goes to some really low notes. I try to do it, too, but I’m really terrible at it.”

Having the confidence to try, to stick with it, is part of the process, according to Merciers and Slusher. Even if the majority of the students choose not to pursue band in high school, they’ve learned a skill.