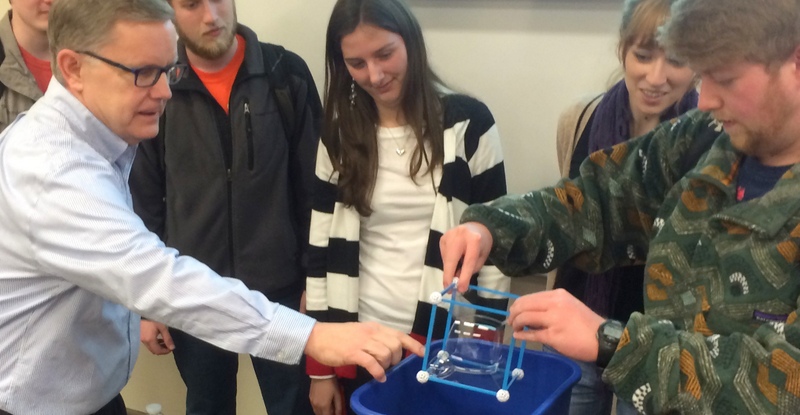 FLORENCE, Ala. - The University of North Alabama Math Department and the Math/Computer Science Undergraduate Research Team welcomed Michael Dorff to campus this past Thursday, Feb. 5, 2015.

Dorff is a professor of mathematics at Brigham Young University in Utah. He received his PhD in complex analysis from the University of Kentucky in 1997. He is the founder and director of the National Science Foundation-funded Center for Undergraduate Research in Mathematics (CURM).

His address to STEM faculty included valuable information regarding how earning a STEM major contributes to careers in business, industry, and government. Additionally, he revealed what recruiters say every STEM student needs to get a job: computer programming, communication skills, and undergraduate research experience.

His student talk titled, "Shortest Paths, Soap Films and Minimal Surfaces," began with finding the shortest path connecting four points and continued up a dimension with a look at equivalent ideas in 3-dimensional space. He used soap films and frames to show the connection between the 2-D and 3-D cases and to examine minimal surfaces in these dimensions.

For more information on the UNA Department of Math: http://www.una.edu/math/